Text and images can go here. 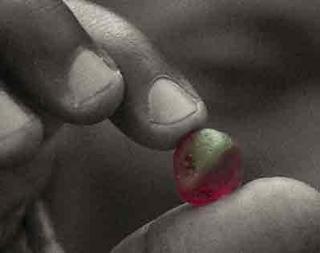 Imagine a time before the existence of the world we know, long before the invention of artificial colors, aniline dyes or LED lighting.

Picture a group of our remote ancestors, a party of Neolithic hunters, clothed in animal hides and armed with spears, picking their way single file, across a shallow mountain stream.

One man stoops to drink.  Out of the corner of his eye, he catches a tiny flash of color against the stream's sandy bottom.  He pauses, looks around warily, then scoops up the object and holds it up to the sun.  The oddly shaped pebble glows with the rich hues of blood and fire.  The hunter's curiosity is sparked, but he looks up, sees his comrades disappearing over the stream's high bank. He stuffs the stone into a leather pouch tied to his waist, hefts his spear and scrambles to catch up.
That night a chill wind blows across the rugged escarpment.  The hunters huddle in the shelter of a rocky cave roasting the day's kill over a warming campfire. The spitting and crackling of the meat and the flow of its rich red juices jogs the hunter's memory.  He rummages in his pouch, extracts the curious pebble, squints and examines it in the flickering firelight.  The man is amazed. The pebble glows like a hot coal yet it remains cool to the touch. What is this magic?  The hunter's heart throbs with excitement.  The man's curiosity turns to awe and perhaps fear.
Other men crowd around, comment and reach for this new wonder, but seeing the greed reflected in their eyes, he snatches it back and stuffs it into his pouch.  Later, alone, he examines the thing noting its straight edges and curious octagonal shape.  Then, seeking to reach the gem's internal fire, he places it on a large flat rock and strikes it with his hammer stone, but no matter how many times he strikes it, the pebble is unaffected.  Next, he saws at it with his knapped flint skinning tool, the hardest object he knows, but the flint makes no mark the pebble's surface., All he accomplishes is to chip and dull his blade.
What happened next is pure speculation.  Perhaps, fearful of the tiny object's magical properties, he brings it to the shaman, the wisest man in his village, who tells him that the stone is a manifestation of the sprits and appropriates it for himself.  Perhaps he trades it to another hunter or, his woman sees and covets it.  He wraps it with a thin strip of wet leather, dries the leather in the sun and ties it, the first pendant, triumphantly around her neck.
Curiosity…, wonder…, desire…!  How many similar scenes play out daily in jewelry stores across the world?  How often I have observed it in my own gallery.  Like a moth transfixed by the flame, our interest in these curious and beautiful natural creations seems instinctive. The first gem may have been the transparent pebble described above or a sunny yellow crystal caught in the firelight and pried from a cavern wall. Perhaps in the search for flint to knap into tools, a particularly beautiful piece of translucent agate caught a young girl's fancy. Humanity's desire to possess and adorn seems instinctive. The first known jewelry, shells perforated to make a necklace, were discovered in a Moroccan cave dating back one hundred thousand years.
The first gems were curiosities appreciated for their beauty and their unusual form. There were no preconceived notions of preciousness. Perhaps one of a handful of crystals had more pronounced color, was more transparent or possessed greater perfection of form. The standards were instinctive, gut level. Even today, an untrained person shown a box containing several exceptional stones of the same variety will, in the vast majority of cases, instantly select the finest stone. The affinity is immediate. After years of contemplating the beauty of gems, I have determined that the basic principles of connoisseurship can be deduced from a thoughtful contemplation of a single fine gemstone.